The katana was the primary weapon of a samurai in Japan. It was used in tandem with the wakizashi in the Two Heavens technique developed by the swordsman Masamoto Takeshi.

The katana has a single-edged blade and around 70cm long. They were made in such a way that they were capable of cutting through armour, and even able to slice a person in two.

Jack's katana has a black saya (scabbard) inlaid with mother of pearl, and the blade itself has a dark red handle. The color of the cross-guard is presumed to be gold.

Notable characters who used the katana in the Young Samurai Series: 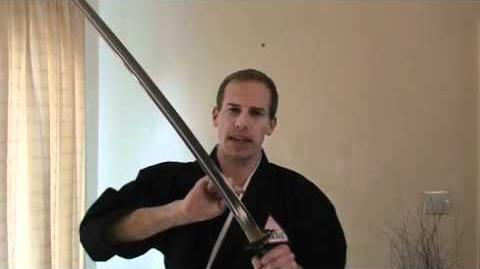 Katana - samurai sword introduction
Chris Bradford talks about the katana
Add a photo to this gallery
Retrieved from "https://youngsamurai.fandom.com/wiki/Katana?oldid=7725"
Community content is available under CC-BY-SA unless otherwise noted.