The Way of the Warrior is the first book in the Young Samurai series and was released in 2008.

Jack Fletcher is shipwrecked of the coast of Japan, his Father and the crew of the ship are slaughtered by Ninja pirates.

Rescued by a legendary swordsmaster: Masamoto Takeshi, and adopted by him, Jack begins the grueling physical and psychological training needed to become a Samurai. But, life is difficult at the Niten Ichi Ryū, he is bullied and treated like an outcast.

With his best friend, the remarkable and beautiful Akiko at his side and all the courage he can muster. Jack must prove himself.

Will he be able to face the difficult challenges and trials and also deadly rivals that will test him to the limit?

"A fantastic adventure that floors the reader on page one and keeps them there until the end. The pace is furious and the martial arts detail authentic." -Eoin Colfer, author of the bestselling Artemis Fowl series

"Bradford comes out swinging in this fast-paced adventure...and produces an adventure novel to rank among the genre's best. This book earns the literary equivalent of a black belt." -Publisher's Weekly

"I promise you will hold your breathe until the end...this is a super novel." -First News

"The story brims with energy, suspense and thrilling, if violent, action." -Books for Keeps

"This is a very fast-paced book, with tons of action...the book keeps things moving right along with no dull moments." -School Library Journal

Masamoto Tenno, the oldest son of Masamoto Takeshi, is killed in 1609 in Kyoto by the feared ninja Dokugan Ryu also known as Dragon Eye.

Two years later a ship, the Alexandria is caught in a storm along the Japanese coast. On board is Jack Fletcher, a 12-year old English boy. When the ship hits a coral reef and is shipwrecked, his father John Fletcher, who is First Mate, sails the ship into a bay. There, the crew attempts to repair the ship as fast as possible, fearing an attack by the Wakou, ruthless Japanese pirates.

When the ship is ready to sail again, someone spots a pirate ship in the distance. That night all lights are out. Jack doesn't feel at ease and takes a look on the deck. There he sees one of the crew members on night watch murdered by a shadowy figure and hurries to warn his father. His father tells him to stay in the cabin until he comes back. Jack hears the sound of fighting out on the deck, and hears frantic scrabbling against the door. Jack opens the door to find his friend Christiaan stabbed through the stomach by a throwing knife. Jack hears his father scream in pain and is forced to leave the mortally wounded Christiaan in the cabin. There his father is surrounded by men dressed in black, and many crew members are already dead. One of the men, with a single emerald green eye takes Jack and threatens to kill him unless John tells him where the rutter is. John tells them in the hope they will let his son live, but the ninja doesn't seem to share his hope. When he is about to kill Jack, John manages to save him by stabbing the man in the leg, but is then killed himself. As he is dying he tells Jack to take the rutter before the ninja can find it and escape from the ship. Jack manages to find the rutter but is found by Ginsel a member of his crew who, by this point has been driven insane. He says he has set fire to magazine, and the ship is primed to explode. Ginsel is then killed by the green-eyed ninja who killed his father. Jack tries to escapes and when he reaches the deck, the ship blows up, throwing him into the ocean.

Jack is later found by Masamoto Takeshi and taken to his sister, Hiroko's, house. There Jack is treated. When he wakes up, Jack hears voices in the room next door. He accidently falls through the paper door and is threatened by a samurai. Following the advice he once got from a fellow sailor he bowed as deep as possible, amusing the samurai.

After a few days living in the house, Jacks grows discontent and tries to escape. He fails and is eventually caught onto by Taka. He also meets Date Akiko, the daughter of Hiroko.

Later Jack is taken to an island where the rest of the village has gathered as well. A duel is about to take place and Jack recognizes one of the competitors as his rescuer, Masamoto Takeshi. Masamoto wins the duel and takes Jack back to the house. There he interrogates him through as translator, a Portuguese priest. When Jack tells them about the murderer of his father, Masamoto realizes it is Dokugan Ryu. Masamoto feels guilty towards Jack for not being able to kill the ninja and loosing his father, so he adopts Jack as his son until he has reached maturity. He also returns the rutter to Jack, seeing it is important to the boy. The Portuguese priest is curious about the book, but Jack lies to him about it, saying it is his father's diary.

As it seemed that Jack would stay in Japan, the Portuguese priest named Father Lucius, is ordered to teach Jack the language. Not much later Masamoto is to return to Kyoto because his school needs him. He leaves his youngest son Yamato in Toba so he and Jack can become friends, though Yamato clearly doesn't want that. When Yamato is practicing with a bokken, Jack sees his chance to learn how to fight with a sword and asks Yamato to teach him. Seeing a chance to humiliate Jack, Yamato agrees. They compete at randori and Yamato always wins. When Jack finally manages to get a draw, He is called to father Lucius, who is dying.

Lucius reveals to Jack that someone is after him and asks a favor of him; to bring his self-written dictionary to Diego Bobadilla in Osaka Castle.

Later, Jack tells Akiko about what father Lucius had said. Akiko advises him to tell someone, but Jack decides against it, because he thinks nobody would believe him.

Jack spends the next few months recovering and learning to speak and write from Akiko. A samurai comes with a message saying that Masamoto will return to Toba soon. The evening before Masamoto's arrival, the house is attacked by ninja, including Dokugan Ryu. Dokugan Ryu asks Jack where the rutter is, but Jack denies to know about it's whereabouts. Before Dokugan Ryu can do anything Masamoto arrives, forcing the ninja to flee.

The next day, Masamoto takes Jack, Yamato and Akiko to Kyoto so they can learn the way of the samurai at his school. There Jack makes friends, but also enemies. one of them being Oda Kazuki. Jack shows to be a talented student in the Way of the Samurai, much to the dismay of others who don't approve the idea of a Gaijin learning their ways.

After the attack in Toba, Jack and Yamato had become quick friends. But when Kazuki attacked Jack and asked Yamato if he would help the gaijin, Yamato backed out and started hanging out with Kazuki. When a confrontation between Jack and Kazuki ensues, involving students of an other school as well, they are stopped by Masamoto and Kamakura Katsuro, the head of the Yagyu Ryū School. Kamakura challanges Masamoto to a Taryu-Jiai and Masamoto agrees. Later Masamoto is furious at Yamato for not helping Jack and the others and shaming the family name. Upset, Yamato leaves the school and joins the Yagyu Ryū.

When it is time for the Taryu-Jiai, Yamato turns out to be one of the opponents of the Yagyu Ryū. When it ends in a draw, Yamato and Jack are to compete against each other for the victory of the school. Whoever gets the Sword of Jade and takes it back to school wins. It is a close race, but when they are climbing next to the waterfall, Yamato can't go on and accuses him of taking away his father. Jack, who has taken the sword, says he never wanted to do that and tries to help Yamato. But Yamato refuses to listen and jumps in the waterfall. Jack jumps after him and manages to save him. Yamato apologizes and asks him to be friends again. Jack agrees.

When they come back at school, Yamato carries the sword. He is about to give the sword to Kamakura, but in the end he gives it to his father, admitting it was Jack who took the sword. Masamoto then tells Yamato that he has what it takes to be a student of his school and a Masamoto.

Some time after the Taryu-Jiai the Gion Matsuri Festival takes place. Jack spends the days with his friends and has a great time until he walks into a man dressed in black. The man tells him to bugger off and Jack recognizes him as Dokugan Ryu. Together with his friends he follows the ninja into the Nijo-castle. There he stops Dragon eye before he can kill Daimyo Takatomi Hideaki. Masamoto rewards Jack and his friends for their bravery, giving Jack his first swords as a gift. Jack realizes he still has a long way to go until he can defeat Dokugan Ryu to avenge his father.

A collection of different covers of the Way of the Warrior. 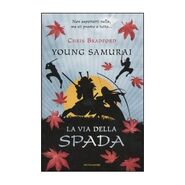 Czech cover
Add a photo to this gallery
﻿
Retrieved from "https://youngsamurai.fandom.com/wiki/The_Way_of_the_Warrior?oldid=8356"
Community content is available under CC-BY-SA unless otherwise noted.